In simple word, Software is the collection of different program. The set of a computer program, booting, procedure and associated documentation related to the effective operation of a computer system are termed as software. A computer is an electronic machine that can only understand and process numbers. A computer can series huge set of instruction which tells the computer, what process to carry out from the data. Those series of meaningful instruction is called computer program. Those programs when combined form software. A software package is a collection of program that solves a particular program or a specific type of job. For instance, photo editing software contains programs for editing, resizing pictures etc. Below is full details about different types of software.

The Software is a large collection of instructions that tells a computer what to do and how to do.

The set of a computer program, booting, procedure and associated documentation related to the effective operation of a computer system are termed as software. We use different types of software according to the requirement of our problem. Special types of software, that controls the entire operations of a computer system and other peripheral devices connected to the computer is called Operating System Software. Microsoft word which is a word processing software is used to create and edit text documents such as reports letters, application, etc. Computer software can be categorized into two major types. They are:

The type of computer program that is designed to operate a computer’s hardware and application programs is known as system software.

The system software can be divided into four sub-Types.

An Operating system (OS) is a type of system software that helps to establish communication between computer hardware and other software. It also controls and coordinates overall operations of the computer system. Application programs access input/output devices or execution program instructions through Operation system. It provides a user-friendly environment (interface) to communicate between user and computer system. When a user wants to carry out any operation, the command is given to the application program which is then delivered to the operating system. 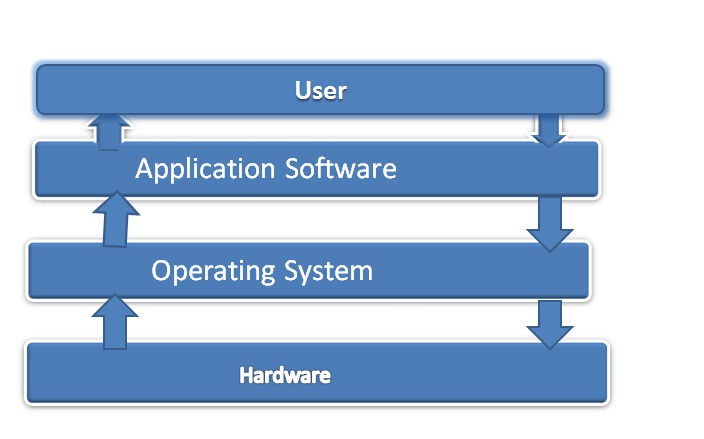 Some of the basic tasks performed by the Operating System are:

There are various types of Operating system. Some common examples are Windows, DOS, Linux, Unix etc.

It is a type of software which is used for maintenance of computer system. This software plays a vital role in making the computer function properly. Special jobs like formatting disk, Virus cleaning, Defragmentation etc are carried out by Utility software. Some examples of commonly used operating software are Antivirus, Network utilities, Screen savers, File managers, Disk defragmenters, Disk cleaners etc. 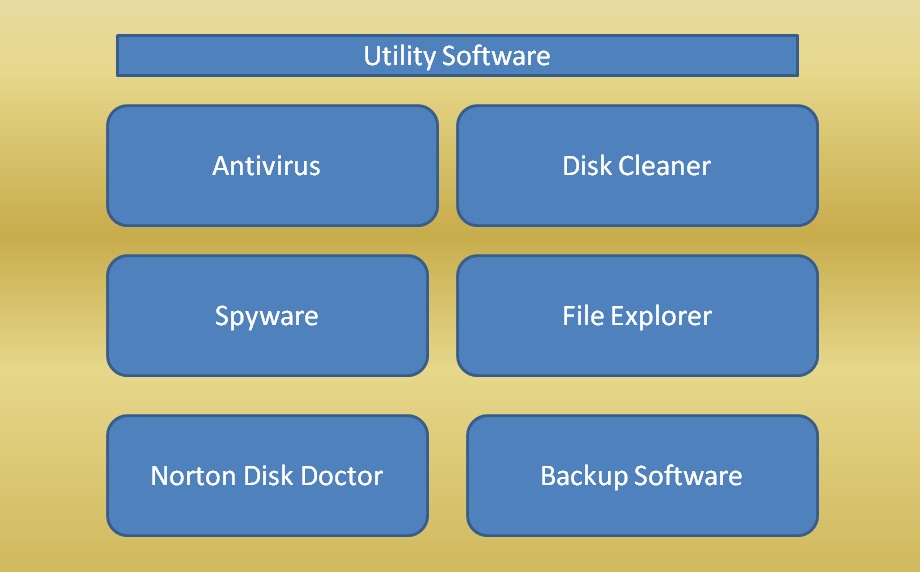 Language processor is a type of system software that translates the programming language code into machine code.

There are three types of language processor

Assembler is a type of software that converts assembly language codes into machine codes. After reading each assembly instructions, it converts them into equivalent machine instructions. The code can run only when all the conversion process is completed.  In case of any bugs or errors in assembly code, the errors need to be removed and the assembly instruction needs to be assembled again.

The program written in a high-level language is called source code. When the source code is compiled, A compiler produces a machine equivalent code called object code.

An interpreter is a type of software that converts the program instruction written in a high-level language into machine code line by line. Unlike compiler Interpreter translates one line of instruction to machine code, executes the instruction, then converts the next line and the process continues. The translation process is interrupted if there is any error on the middle of the program. The program needs to run again from the beginning after removing the errors. QBASIC, GWBASIC, BASICA etc are few examples of programming languages that uses an interpreter.

Different software companies create these types of software and are available in marked on CDs. It can also be downloaded from the official websites of these companies.

The application software can be sub-divided into two types.

Sometimes companies, organization or an individual needs specific types of software to solve specific problems, so they ask the software development companies or individual programmers to develop a custom software that meets the requirement to solve their problem. These types of software are known as tailored software. For instance, Payroll system, Result processing, Library management system, Banking system, School management system etc. are the example of customized software. Tailored software can be modified as per the user’s needs.

General software are those types of software that are made by software companies to solve the general problems of people. It is not tailored to meet the specific requirement of specific people, It rather targets all the people that might have similar types of problems. For instance, typing letters, writing an essay, storing data, pictures editing etc. Unlike Tailored software package software, there’s no possible way to modify the package software according to user’s requirement.  Some basic examples of these types of software are Ms-excel, MS-access, Photoshop, Dreamweaver, Notepad etc.