A Computer Network is a collection of logically connected computer devices or computer systems that communicate in unison and share resources among several users within the network. This article will explain in brief about the computer networking fundamentals. 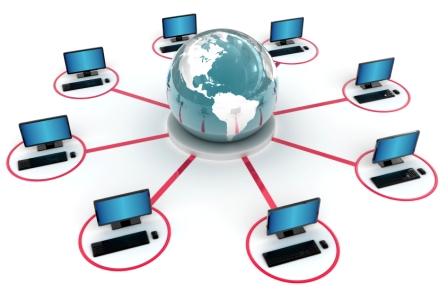 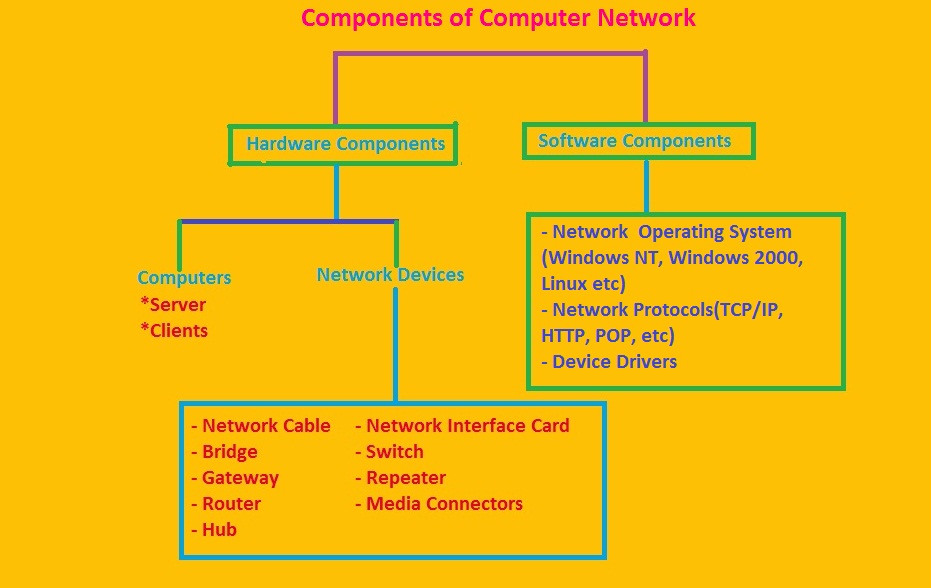 For a computer network to function perfectly it has to be setup with the adequate and perfect hardware devices. Here we are going to talk about and explain some of the major hardware components of a computer network and their purpose in the network.

Hub is one of the basic network connecting devices. It connects different computers in Local Area Network (LAN). The information transmitted between computer passes through the hub. A hub is often referred to as a “dumb device” because it cannot identify the source or the destination of the information it receives. Whenever it receives any information, the information is transmitted to the entire connected computer, but the data packet reaches destination unaltered. A hub can either send or receive information at a time(half duplex), so it works slower than routers or switch.

It connects multiple Ethernet devices to make them work as a single unit. The ports in this types of HUB have RJ-45 connectors.

They are smarter than passive Hubs. They receive the signal, regenerates, concentrate and strengthen the signal transferring to their destination. Due to this reason, it is also known as a multiport repeater.

It isn’t responsible for improving the signal, it simply forwards the received signal to the destination.

Switches connect multiple computers together in LAN. It uses twisted pair cable to connect different computers. The work of both hub and switch is the same. But the difference is seen in the way they both; switch and hubs treat the data they receive. The switch has an inbuilt system to identify the specific computer with its MAC address. Hubs transmit the data to all the network computers while Switch finds the destination computer and transfers it to that specific computer only. Since the path for signal transmission is well defined in a switch so the network performance is more efficient. That is why a switch is smart than a hub.  A Switch can both receive and send data (Full duplex) at a time so data transmission is faster. The switches supports

NIC stands in first place in the list of various types of network devices. It stands for Network Interface Card. It provides a port on the back of the system unit to connect a computer on a network, or the internet. NIC uses Ethernet cable with an RJ-45 connector. The NIC, also known as network adapter is placed in the expansion slot of the motherboard in almost all modern PC. They are also available separately. To transmit data between its internal parts the computer uses parallel data transmission technology. But the media which connects different computers uses serial data transmission technology. The function of NIC is to convert serial data stream into a parallel data stream and vice versa.

Basically, a router connects multiple networks of different types and determines the perfect path for transmitting data. It actually connects one LAN networks together.

Usually, A router is found in the Network layer of the OSI Network model, where it performs the function of examining received data packets to determine its destination’s IP address within the packet’s header. It then examines the internal routing table to find the path to send packet within the network, it then pushes the packets to a proper outgoing port.

The process of moving information from a source to a destination is known as routing.

This is where a set of protocols are provided and stored within the network. Routers then a dynamically get paths from the protocols provided.

Here the router is manually configured with the routing table.

Unlike gateways, routers are actually slow since a lot of time is spent on packet analysis. And they are also very expensive.

Basically, a bridge is network device used to connect two similar LANs or networks. It can also be used to break down a larger network into small and manageable segments and manages data flow between the segments. It also joins different network medias i.e.Unshielded twisted pair and fiber optics.

Bridges filter traffic within the networks by use of MAC addresses. It Checks the MAC address of the device the data packet is from then records it in a map between the sender’s address and the port number, it then checks the recipient’s MAC address and queries it with the previously recorded list. If the address is found the packet is sent to the port that the recipient is connected to. If the destination of a packet is unknown, the packet will be pushed to all network segments.

Bridges are actually located at the Data Link Layer of the OSI network model.

The major disadvantage of bridges is that they cannot connect dissimilar networks.

Primarily, a gateway is a device that connects or acts a doorway between two networks i.e. a LAN and a WAN.Its sole function is to receive and forward data packets to the intended network. In this way, it also converts these data packets received into formats that are known by the devices within the network. Devices connected to the gateway are always configured with a default gateway. This Default gateway enables forwarding of data packets whenever the destination for the data packet is lost or can’t be found.

Gateways can be found in any of the seven layers of the OSI network layer.

A modem is a device that is programmed to enable the transmission of digital signals over a normal telephone line. It does this through the processes of Modulation-Demodulation. Modulation is the process of converting digital information to analog signals, whereas Demodulation is the opposite of modulation, i.e. conversion of analog signals to digital information. Actually, Modem is an abbreviation of “Modulator- Demodulator”.

This is a modem that is connected to a serial port (16550 UART) in order to ensure maximum data throughput or USB port.

Its disadvantage is that it requires a power source and space for it to be placed.

Its advantage is that I can be moved from one workstation to another and the light emitted by the modem can be used to check any connection issues.

This a modem that is used directly within the computer itself and is connected to the computer through the input-output bus.

Its advantage is that it doesn’t require a power source or physical space.

CSU/DSU is also known asChannel Service Unit/Digital Service Unit, is two network devices that are Found within the Physical Layer of the OSI network model. They Provide interface between digital terminal equipment.

Channel Service Unit (CSU) is a device that acts a barrier between a LAN and WAN. It also ensures that signals are pushed to the WAN at in a timely way. CSU also conduct loopbacks and creating alter signals that can be used for diagnostic purposes.

Digital Service Unit (DSU) interfaces Channel Service Unit (CSU) and the computer device. Its major function is to convert the signals from other devices into a digital signal output that can be transmitted over telephone lines with the correct voltage. It also manages signal regeneration and timing.

Actually, a proxy can either be a computer application or device. Proxies provide security to a private network by hiding all its connections and communications from the public networks. This is always done through encryption. If one needs to access the local network externally he/she is forced to use a proxy, hence no direct interactions between the private network and the public network.

DCE the abbreviation for Data Circuit-terminating Equipment. It’s a network equipment that forms an interface between DTE (Data Terminating Equipment) and data transmission circuit. Its major function is to perform the signal conversion, coding, and line clocking.

DTE – Data Terminal Equipment is a networking equipment which performs the function of converting data received into signals and recovering signals received into data.

Of all other network devices, Repeaters are little outdated nowadays. They were once used to amplify weak signals. A repeater works by receiving weak signals from the computers or other devices on the LAN and regenerates and amplifies the signal to make sure there is no data loss while traveling along a longer communication media. The demerits of repeaters are that it cannot redirect network traffic or decide what specific route that certain data should take.

Network software or Network Operating System (NOS) is a special type of software which manages and control all the resources in the computer network. This software is designed to manage, monitor and help set up computer networks. There are various Network operating Systems available in the market. Novell Netware is the most popular NOS. Network software can manage all types of networks from the smallest home networks to the largest organization networks. NOS(s) are used in Server computer.

A protocol is a set of rules for sending and receiving data. It defines what data is communicated, when it is communicated and in what manner is it communicated. The first protocol was the Network Control protocol (NCP). Later Transmission Control Protocol/Internet Protocol was introduced.

Based on the geographical area a network has covered, they can be divided into three major types:

LAN is the small computer network that expands a room or a building.

MAN is larger than LAN but smaller than WAN. It covers a metropolitan, a city, district, State or a country.

WAN is the largest computer network which expands countries, continent, and an entire world. WAN is a collection of different LANs and WANs scattered all over the world. The best example of WAN is an Internet.

Network architecture means a way on which computers on the network communicate and interact with each other. Network Architecture is a combine form of mode of transmission and topologies. It is another part of computer network fundamentals.

Network architecture can be divided into two types.

Peer-to-Peer is a type of network architecture where every connected computer plays the role of both clients and server. Each computer has equal responsibilities of using and providing resources.

It is very popular topology used in LAN. In a star topology, all the computers and other network components are connected to a central device. The central device may be Hub, a router, switch etc.

All the nodes in ring topology are connected to each other to form a circular loop. In this topology, all the computer have equal access. Since the data transmission takes only in one direction (clockwise or anticlockwise), the chance of data collision is almost zero in the ring topology.

All the computers and network devices in mesh topology are connected to each other forming a Mesh shape.

Tree topology is a bus topology of a star topology. 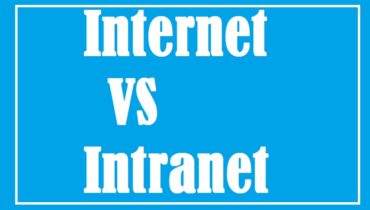